I. Modern slavery risks in the cleaning industry

Modern slavery and the continuum of exploitation

The infographic below highlights the continuum of labour practices spanning from ‘decent work’, to situations of modern slavery where workers cannot cease or refuse work due to elements of coercion, threats or deception and may also be deprived of their freedom. 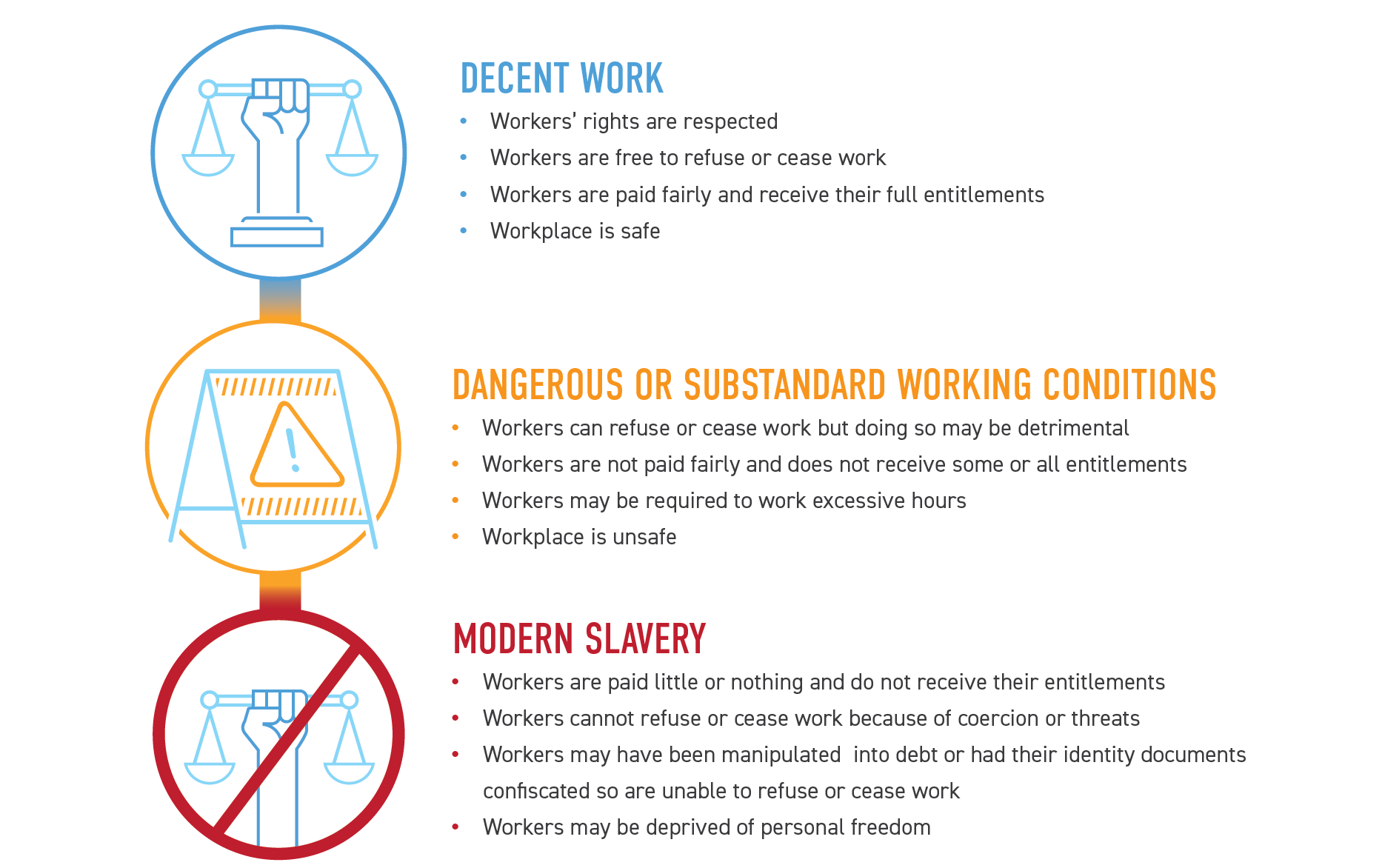 The vulnerability of workers in the cleaning industry to labour exploitation and modern slavery stems from a particular set of industry and workforce features including:

These inquiries, and the testimonies of victims of exploitation and modern slavery that instigated them, are what has ultimately led to Australia legislating the Modern Slavery Act 2018, which creates the expectation that business is transparent about their efforts to prevent modern slavery in their operations and supply chains. The Australian Government’s first modern slavery statement published in late 2019 identifies cleaning services as one of four key high-risk focus areas within public sector procurement.

CAF’s approach to addressing modern slavery is founded on the promotion of ‘decent work’. The CAF 3 Star Standard is based on minimum legal standards relating to wages and entitlements, safe and secure work, respect in the workplace, and freedom of association.

Indicators of modern slavery to look out for 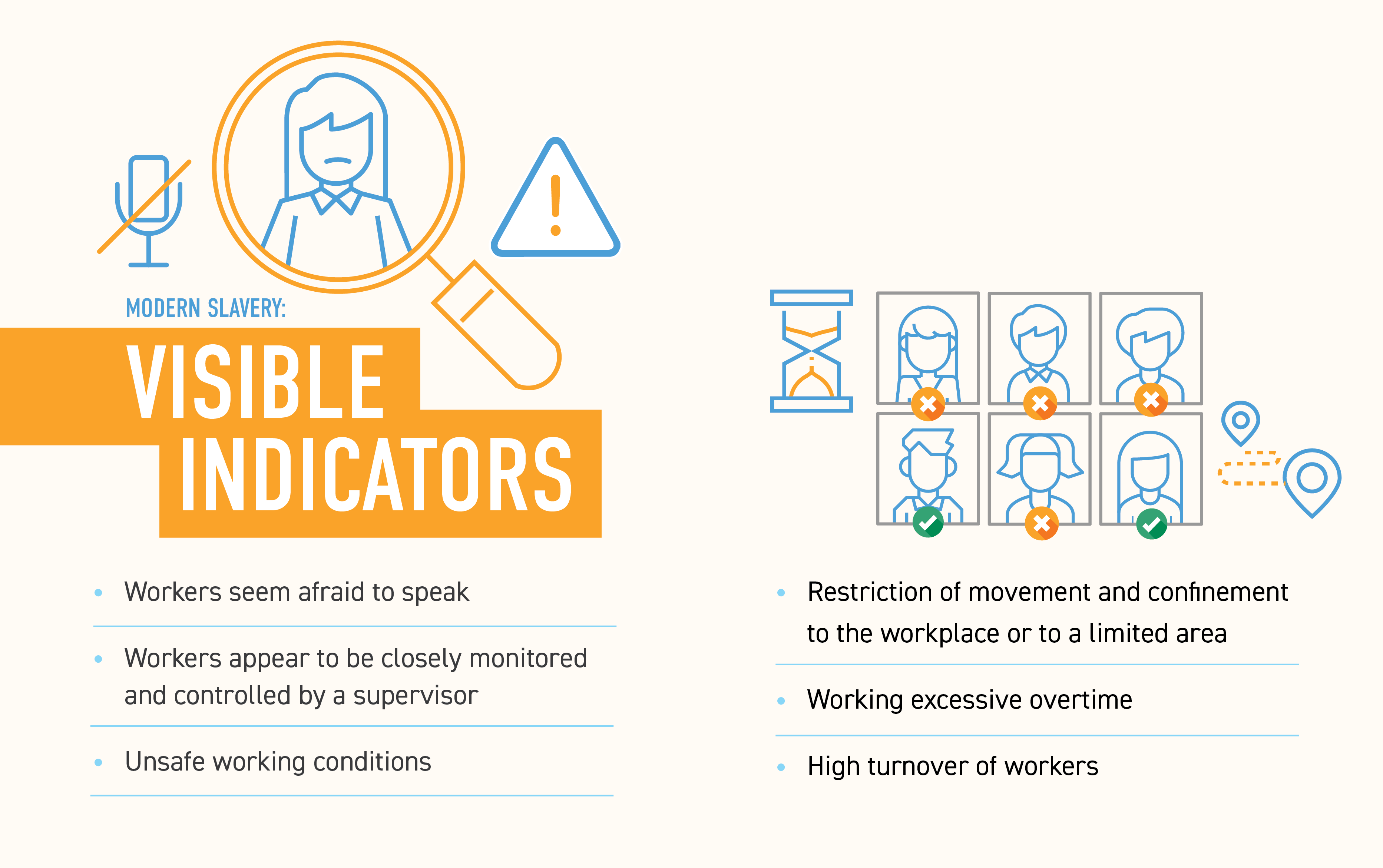 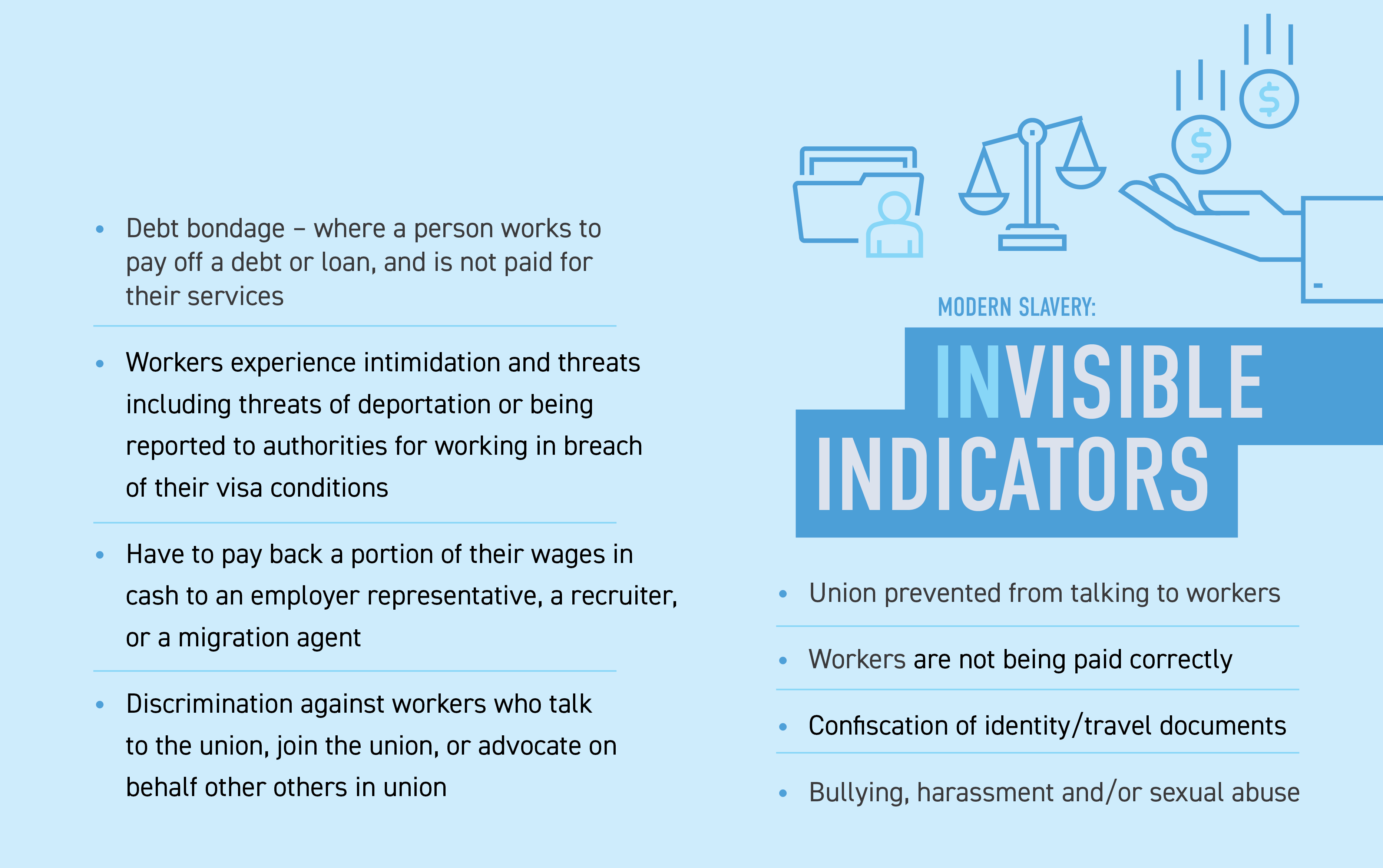 See CAF’s victim support matrix for guidance on which stakeholders are best equipped to identify and support victims and potential victims of modern slavery.

Case studies: what does modern slavery look like in the cleaning industry?

Modern slavery is difficult to identify and remedy in supply chains because the multi-level contractual separation between those performing the work and the beneficiaries of their labour impedes transparency and accountability, leaving victims hidden in plain sight.

It is significant to note that these practices start at the point of procurement, with tender processes that encourage undercutting resulting in contracts being awarded at prices that do not allow for the payment of minimum wages and entitlements and safe productivity limits. Poor oversight of contractor compliance with labour standards, and a workforce that does not feel safe to speak up, are also key risk factors for modern slavery.

Below are some hypothetical case studies based on real-life examples of modern slavery and of serious labour exploitation, with a range of risks and indicators as a situation where modern slavery might arise. The case studies also highlight how CAF’s unique certification framework would assist to identify, address and prevent these practices.

Big Build is an Australian property company that builds and leases office space in major capital cities. Big Build uses a facilities management company, Middle Management, to procure and manage cleaning services at its office buildings. Middle Management was under instruction to keep cleaning costs down for Big Build, so the cleaning contract at 123 Big Street was awarded to Squeaky Clean, who put in one of the lowest bids. Big Build used the cost savings from this contract to improve end of trip facilities for tenants.

The cleaners employed by Squeaky Clean to work at 123 Big Street are all on temporary work visas and speak limited English. Most of the cleaners come from the same region and were recruited and promised accommodation by the supervisor before they arrived in Australia. At 123 Big Street, the supervisor closely monitors and directs cleaners’ activities and prevents them from speaking to the Middle Management facilities manager or to tenants of the building. Unbeknownst to Big Build or Middle Management, Squeaky Clean’s supervisor has confiscated the cleaners’ passports and is claiming the majority of their wages in a cash back scam as “payment” for inflated debts incurred during their travel to Australia and for their accommodation.

One tenant suspected something was wrong when he overheard the supervisor yelling at some cleaners one night when he was working late at the office and asked Middle Management to check that these workers were being treated fairly. When approached by Middle Management, Squeaky Clean’s area manager provided paperwork that suggested everything was in order: valid work visas, pay slips, bank transfers of wages for all cleaners registered to work at 123 Big Street. Middle Management was satisfied that no modern slavery was occurring.

Shortly thereafter, the tenant who suspected modern slavery noticed that the cleaners and the supervisor had disappeared and that a new group of cleaners had replaced them.

There are a range of risk factors and indicators in this case study, which together suggest a situation of labour exploitation and coercion which may amount to modern slavery, such as debt bondage and deceptive recruiting. However, there will be no access to justice for these workers.

If Big Build was involved in CAF certification, a transparent and accountable procurement process would have reduced the risk of an under-priced cleaning contract being entered into at 123 Big Street. Middle Management would have received guidance on how to monitor and enforce compliance with the contractual terms, and Squeaky Clean would have their employment practices scrutinised both prior to the awarding of the contract and throughout the life of the contract. Importantly, the cleaners at 123 Big Street would have been able to speak to an independent third party about their conditions and receive support and access to justice.

A group of 9 international students are engaged to work as cleaners for Dirty Business at this site. While the international students are technically employees, Dirty Business engages them as independent contractors in a sham contracting arrangement at a rate of $17/hour for 40 hours/week, with no insurance or entitlements. After four weeks of cleaning at the construction site, the cleaners have not received any pay. When they ask for their pay, Dirty Business’s manager shouts at them and falsely claims they are responsible for damage to the property and so they will not get any of their money, and that they are fired. Dirty Business’s manager tells the workers that if they call again asking for money, he will report them to the authorities and get them deported for working more than 40 hours per fortnight in breach of their visa restrictions. The workers are afraid of being deported and so they cut their losses and find another cleaning job, also sham contracting and underpaid. Dirty Business’s manager posts an ad on an internet forum for international students and finds another group to work at the site. It is likely that this next group of workers will not get paid either, and that they will be threatened if they ask for their pay.

In this case there are again a range of risk factors and indicators that suggest a situation of extreme labour exploitation. While the cleaners were free to leave their work, there were elements of threat and coercion, which are high risk factors for situations where modern slavery may flourish.

Workers who experience this type of modern slavery rarely have access to justice, as the workers are too afraid to come forward if they have worked more than the allowed hours. In many cases, they simply do not know who to approach. Some of these cases come to the attention of United Workers Union via referral from Church-based charities that migrant workers contact for foodbank assistance and can be assisted by the union, but most cases remain hidden.

COVID-19 has placed cleaners at greater risk of modern slavery.

Reductions to cleaning services and sudden changes to supply chain structures can increase vulnerable workers’ exposure to modern slavery and other forms of exploitation. Loss of income or fear of loss of income, low awareness of workplace rights, requirements to work excessive overtime to cover capacity gaps, or the inability to safely return to home countries increase the vulnerability of some workers to modern slavery.

The loss of jobs in some sections of the cleaning industry relating to lockdowns and economic contraction has also meant that some workers have been displaced into highly exploitative sections of the labour market where the risk of modern slavery is increased.

The Department of Home Affairs has outlined some key steps entities can take to protect and support workers in their operations and supply chains during COVID-19:

IMPORTANT: CAF Modern Slavery Guidance usage statement: This Guidance is intended for use by CAF Members only. Any unauthorised use, reproduction or distribution of the Guidance will be considered a breach of CAF Membership Terms & Conditions and may result in termination of CAF Membership. Reproduction or use of parts of the Guidance in CAF Members’ own material and statements is permitted however must be attributed to CAF and referenced accordingly. CAF highly recommends Members consult with CAF staff prior to publishing any CAF-related material to ensure accuracy. 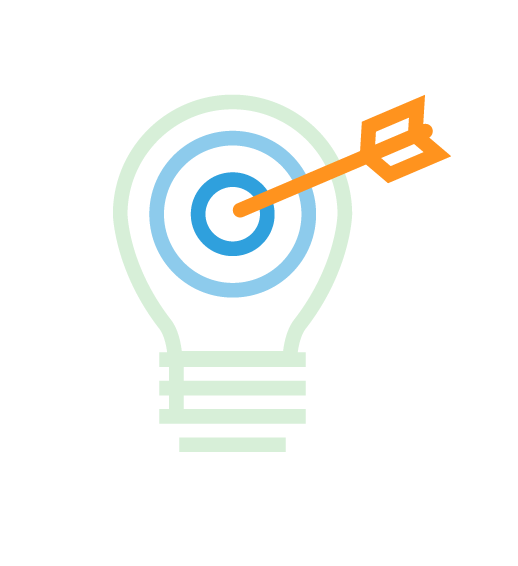 This Sydney-based role is a great opportunity for anyone that wants to develop their skills and experience in human rights due diligence.